StandICT.eu – Legacy and Road ahead towards 2023

StandICT.eu – Legacy and Road ahead towards 2023

StandICT.eu drew its final curtain call this February 2020 but not without some genuine applause from the community. This Pilot Project Initiative started back in January 2018, as a first of its kind in the field of ICT Standardisation so was subject to some degree of scepticism from the entire ICT standardisation community as nobody knew how this was going to pan out: a continuous Cascade Funding flow spread across 8 different Open Calls, very close together to effectively support endeavors of European ICT Standards experts that would be plugged into International ICT standards efforts. Well we can all breathe a sigh of relief as the reviews & the various rehearsals and performances went off with a very few hitches.

Throughout the 26 months of the Project, StandICT.eu gained a crescent visibility culminating to be recognised as widely acknowledged brand as well as an invaluable financial mechanism to enable specialists to further develop ICT Standards-related activities. Besides, this process resulted in a flurry of an internal community of ICT Specialists (accounting, to date, of over 700 individual experts many renowned in their ICT standards field), a consolidated synergy with hundreds of Standard Developing Organisations, SMEs, National Standards Bodies, EU Standards associations and similar Standards-driven projects coming together coupled with the implementation of an interactive Watch to carefully monitor the ICT international Standards landscape.

StandICT.eu provided major coverage of the most critical technological areas, of the Key Pillars of the Digital Single Market as well as the ones included within the European ICT Rolling Plan for Standardisation. Those two reference points acted as a compass to steer the Project guidelines across the ongoing Open Calls and to adequately tackle the most significant Gaps and Priorities Europe was facing. The achievements the project managed to attain are highlighted as follows: 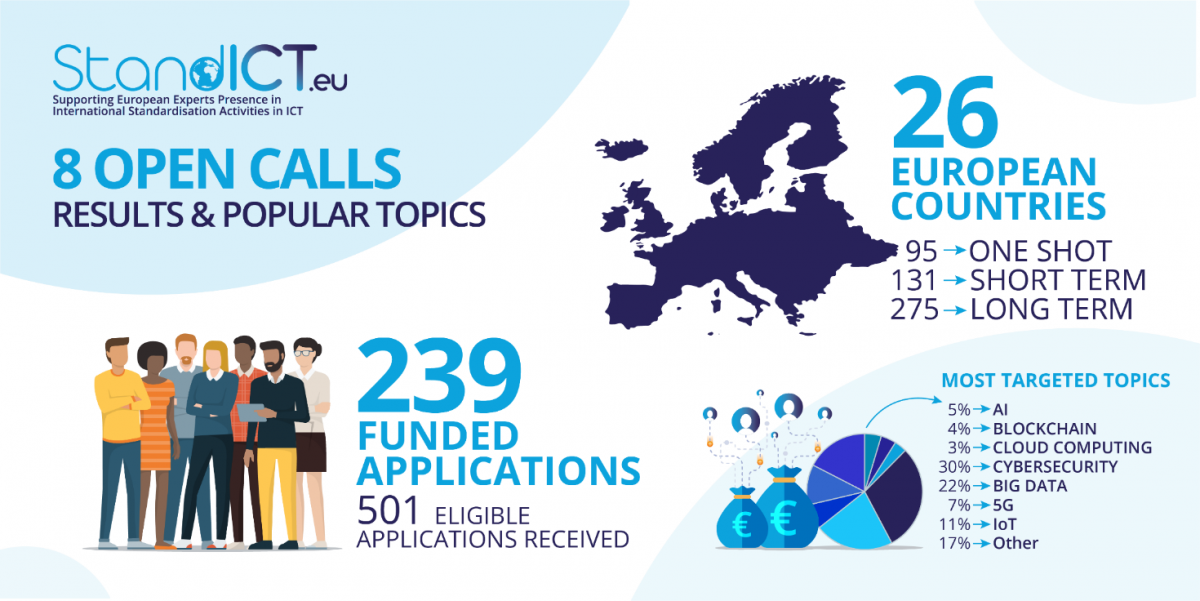 The Final Review which took place on the 12th of March was the perfect opportunity to take stock of the accomplished results, but also to build on valid recommendations, lessons learned to be taken into account in the continuation of the initiative, as expected in the second half of 2020. The following around three key-areas are important.

Community Engagement – The high involvement of the community of specialists has been the crowning achievement of StandICT.eu. Starting from zero, the internal Network grew to now over 750 active members. The grantees mostly praised and appreciated the opportunity to carry on their efforts in Standardisation, stating that this would be (under the best circumstances) very challenging without the support of StandICT.eu. The hands-on attitude of the community affected also events attendance and Social Media engagement, with StandICT.eu digital channels now regarded as a trustworthy and authoritative source of information for the ICT Standards range. The future project should focus more on joining and organising events not exclusively addressed to SDOs or Tech. representatives, but reach out other Stakeholders like PPPs, SMEs and Industry Players, Vertical Industries and the numerous Research associations that cope with arising ICT subjects.

Standards Watch – The realisation of the Standards Watch was carried out with a view to set-up an interactive observatory of the ICT Standards global scenario at the disposal of the EU Standardisation community. The continuous (and still current) effort turned the Standards Watch in a hub that contains over 1000 ICT browsable Standards. Nonetheless, for the benefit of the future initiative, the revised Watch should be able to give a clearer picture in order to enable also newcomers in the ICT field to better figure out the overarching landscape, by providing a thorough segmentation of each Working Groups and Technical Committees within the different SDOs and who’s exactly working in a specific field.

As follows, any applicable recommendations to bear in mind to enhance the Watch effectiveness and achieve the former objectives in the coming project:

Open Call Process – The overall management of StandICT.eu was a seamless process, mostly thanks to a fully operational Grants Platform that allowed administrators, evaluators and applicants to easily perform their duties. The overall impact of StandICT.eu has been featured in the Final Impact Report, a document that draws attention to the contributions made by each of the successful experts in their related field. In the future, the initiative should be committed to deliver more in-depth reports after the conclusion of each Open Call, in order to allow a careful analysis of impact and outputs as well as to better tweak the following Calls accordingly.

In closing, we suggest you to stay tuned on our digital channels to get updated and detailed information on the next StandICT.eu edition and the consequent launch of next Open Calls.

Thank you for supporting us throughout these 26 months it has been a pleasure servicing the ICT Standardisation Community!