StandICT.eu Final Event “Reflections & Sustainability - 24 Months On” delivered its final event on 5th of December 2019 at the DG Connect premises of the European Commission. One of the project’s principal goals was to support and fund European experts interested in contributing to global ICT standardisation efforts. With the remarkable number of providing funds to 250 funded applications, StandICT.eu concretely reinforced European presence to help shape priorities, needs, requirements and know-how and influence, where possible, European priorities internationally. The Final Event gathered over 70 representatives of SDOs Technical Committees, SMEs, Research Organisations alongside European Commission Policy & Senior Officers and active members of the StandICT.eu community (among which 22 funded applicants and 6 members from our External Advisory Group EAG).

The Workshop has been a unique and open opportunity to showcase the outcomes achieved over the entire period of the initiative, paving the way to a brand-new Funding model to enable 178 ICT Standard Experts to bring their expertise in the worldwide Standardisation landscape and help impact the key-ICT technology areas which make up the Digital Single Market.

Silvana Muscella, Project Coordinator and CEO of Trust-IT Services (organisation leading the project together with its partner Fraunhofer SCAI from Germany), opened the day with a 30 minutes intro commenting on the main achievements of the initiative. Besides the notable number of ICT experts empowering them in doing what they believe in and value who received financial support, some other aspects were pinpointed where StandICT.eu managed to deliver a balanced distribution of funds going into a broad range of different SDOs, to allow many SDO organisations to benefit from StandICT.eu” 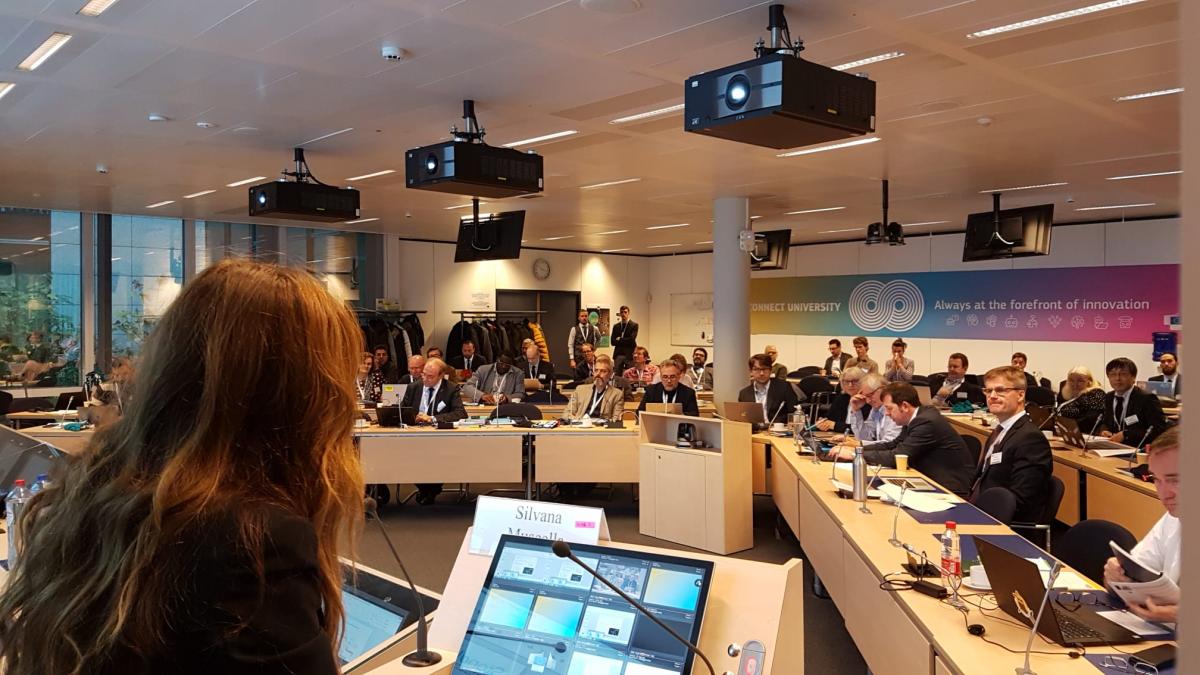 Noteworthy was the multiple iterations of the StandICT.eu Standards Watch, the interactive tool that encompasses the most relevant Standards in the ICT field whose idea is to provide an exhaustive mapping of the future direction of ICT Standardisation but also a practical guide for newcomers in the arena, as well as introducing an element of “empowering multiple user contributions to allow a more socially advanced tool”. This observatory underwent multiple iterations and clearly is to be considered an evolving watch for the future. Finally, Silvana concluded how the next Funding Platforms “should be open to all Europeans and distributed in synch with the Multi-Stakeholder Platform (MSP) guidelines with an augmented involvement both of SDOs and Stakeholders”. 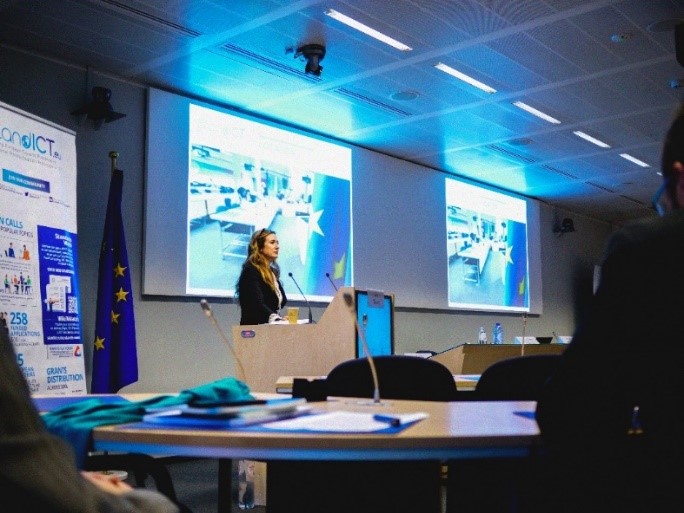 The Workshop hosted also two EC Representatives as speakers. Peteris Zilgalvis, Head of Unit of Digital Innovation and Blockchain at DG Connect, introduced 3 top-priorities following the new Ursula von der Leyen’s Commission “that should go hand in hand with the President’s Agenda for Europe, namely Sustainability, ICT Standardisation and Digital Sovereignty”. Since Europe will heavily invest in disruptive research and breakthrough innovation, a new set of Standards for this new generation technology shall be defined to become global norm. “A true sustainable Europe is the one that generates opportunities, innovates, creates jobs and offers a competitive edge to its industries. The circular economy is pivotal for developing Europe’s future economic model”.

Reka Hosszu, EC Policy Officer at DG Grow, presented a detailed overview on the progress around the 2020’s Rolling Plan for ICT Standardisation and the Multi Stakeholder Group’s work behind this. A point that stood out are the necessity of a more collaborative and inclusive approach from the MSP side, “in order to attain a deeper engagement of all involved actors as well as to increase transparency of mandating process and to generally promote standardisation as a policy tool” 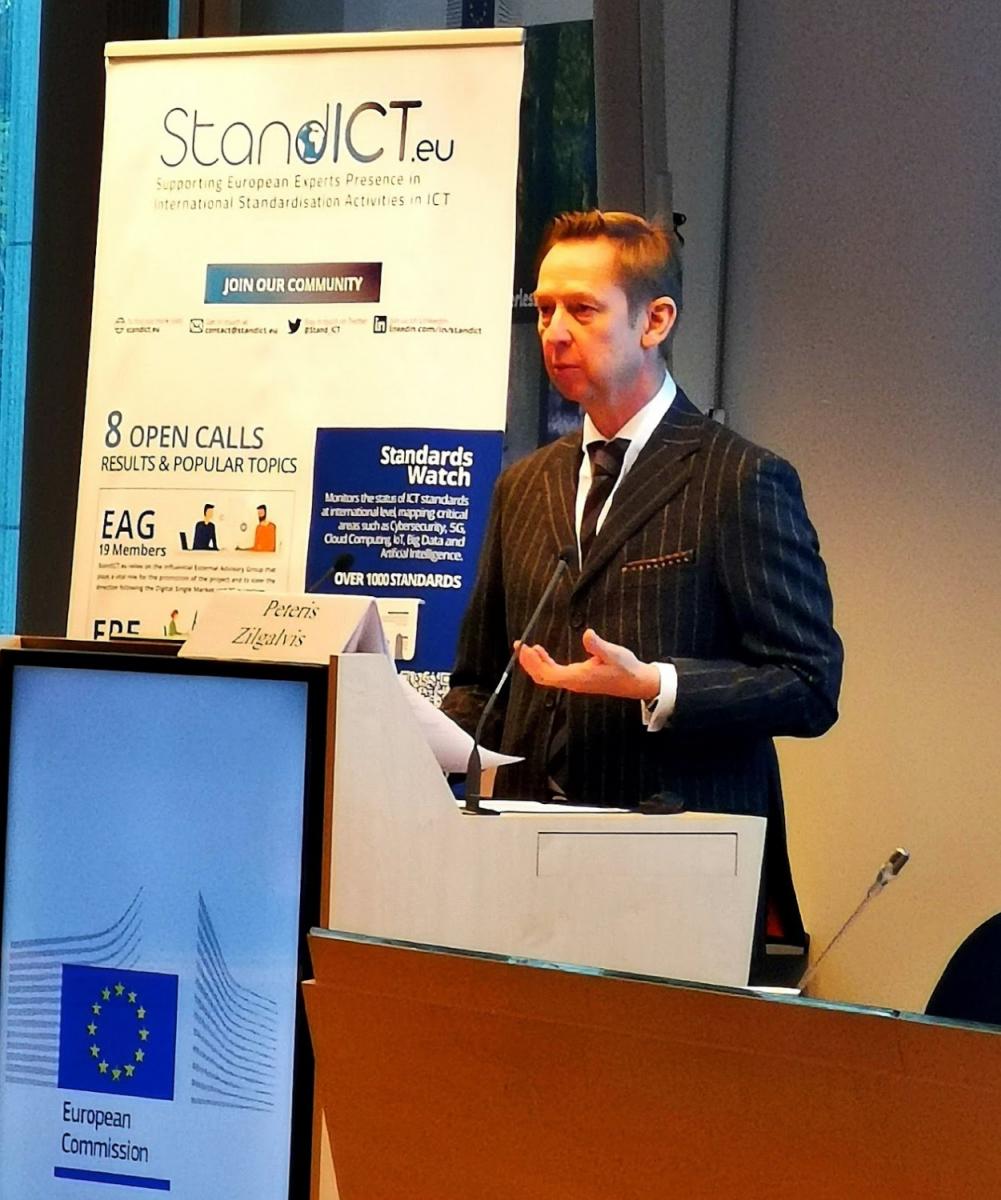 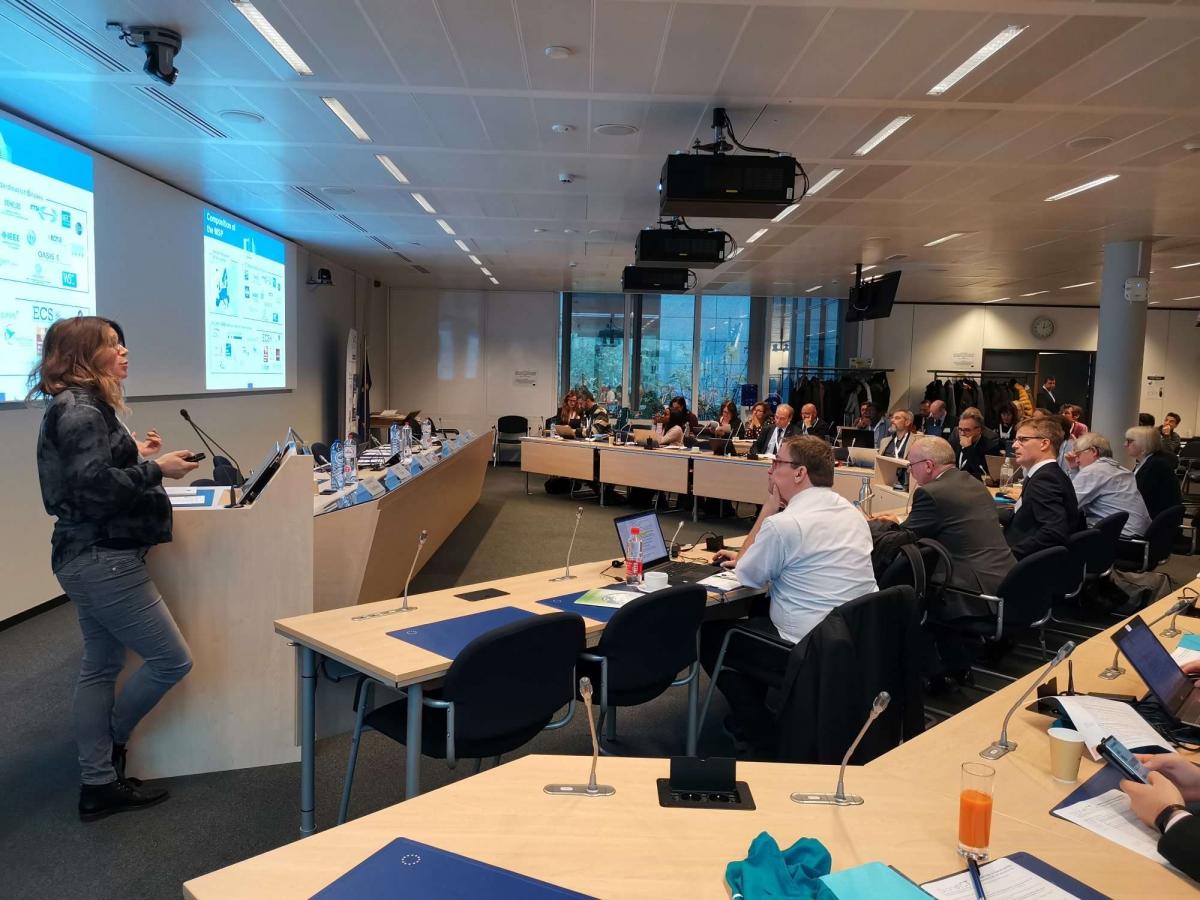 At DG Connect of the European Commission acknowledged the work carried out by the project in respecting the implementation work plan and to look towards sustaining technological sovereignty of European activities.

The Panel focused largely on the possibility to boost the average involvement of Vertical Industries to SDO activities to help bridge a solid link with Standardisation (especially within the 5G domain). Cen Cenelec proved to have already deployed similar efforts with similar “bridging projects”. At the same time, as mentioned by McAuliffe, “it would be crucial to minimise work duplication using joint working groups, as JTC1, to support and streamline coordination among different groups”. The idea of an SME-driven platform has been proposed to collect requirements, use cases in more detailed and not just high-level and better onboard users in standardisation processes.

With a view of strengthening the Education & Training within the Standard field, a dedicated Workshop/Tutorial on Standards Writing has been suggested as a methodology to back up ICT Standardisation in Europe but also with a view to raise the new generation of ICT experts. One way of achieving this is by building stronger connections between Standards and Education by coaching students on how to become standards specialists, building on existing initiatives, such as the ISO Repository of Teaching Materials, Cen Cenelec’s Bridgit Project and the ETSI Educational Course Book and its integration into academic curricula. 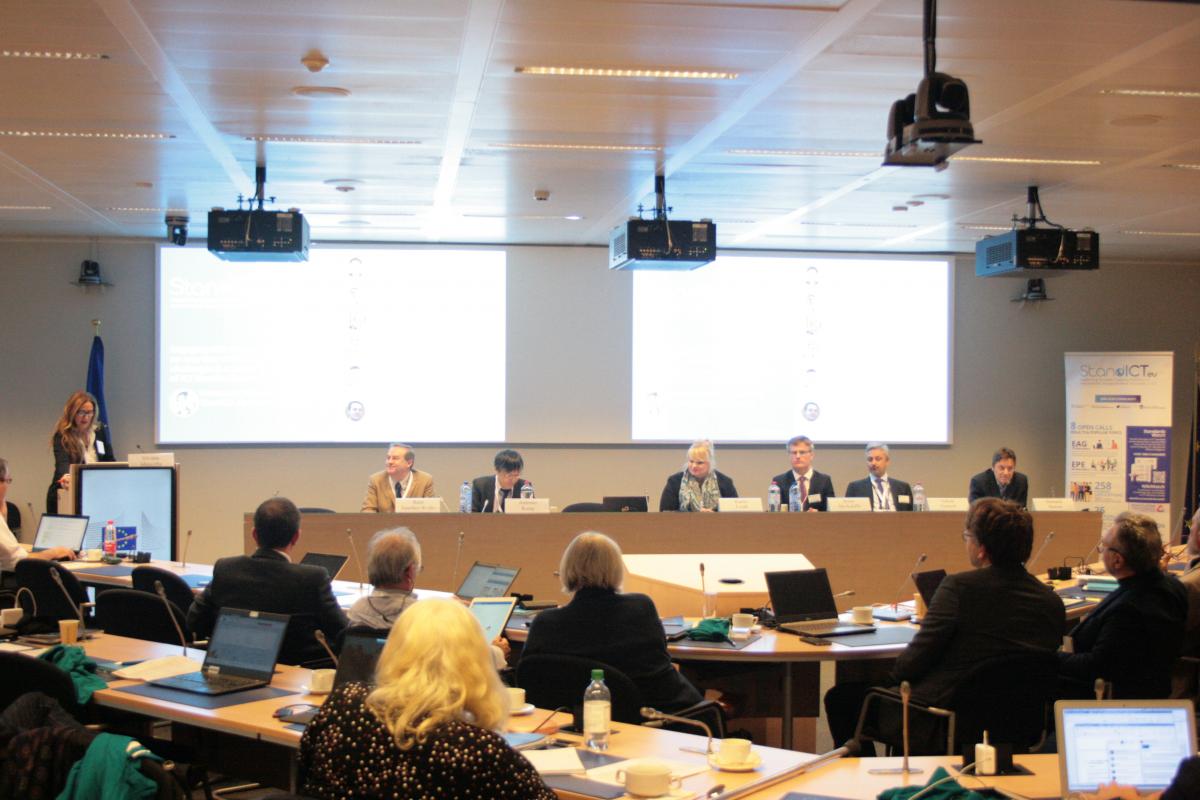 Panel 1 on Needs, Future challenges and space for improvements of ICT Standardisation

Panel 2 – StandICT.eu: a reliable support to make an impact on ICT Standardisation 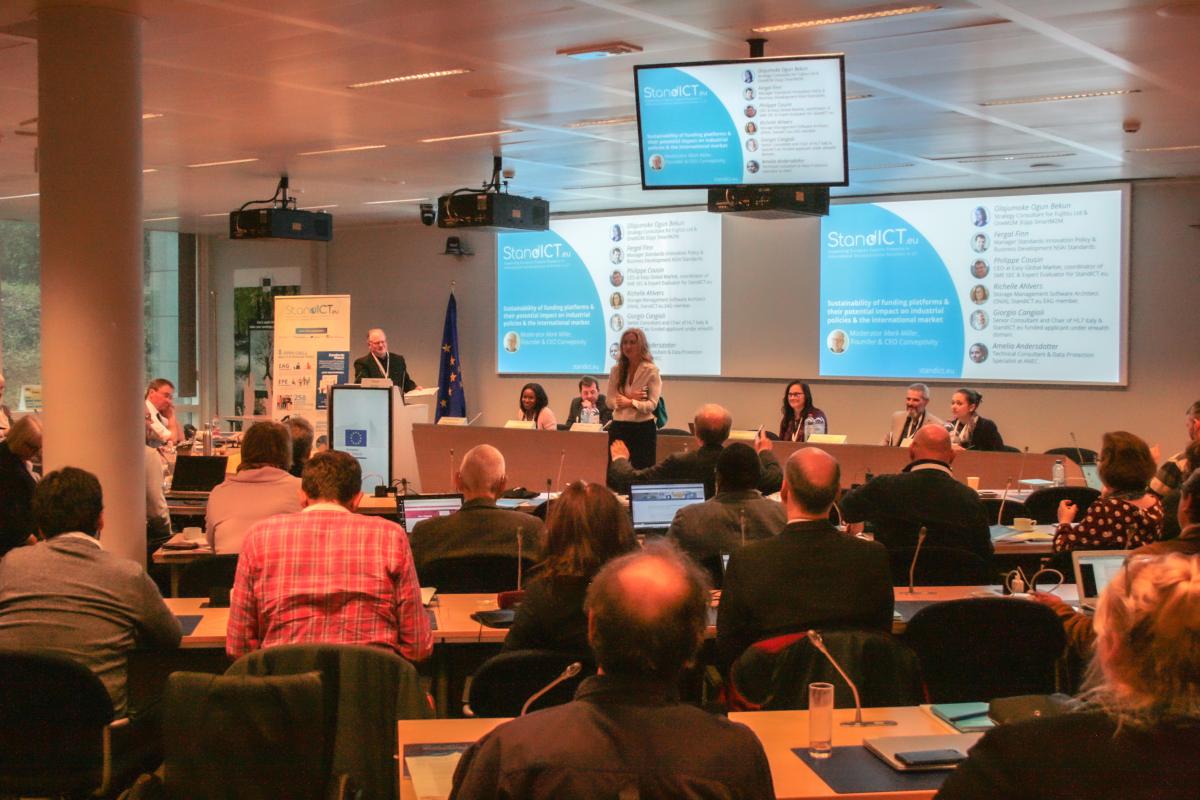 Panel 2 on Sustainability & importance of funding platforms for ICT experts

The panel emphasized the fundamental role played by StandICT.eu to enable many ICT Experts to bring their knowledge right into the developmental process of Standards with a shared recognition that many of them would be otherwise prevented to. “Projects such as StandICT.eu are incredibly helpful to support societal Stakeholders to overcome mechanical, technical and strategic challenges to fully join the Standardisation playground”, said Amelia Andersdotter.

It was also stressed how future of Standardisation will be tightly intertwined with the concept of education: too many gaps are still present (mostly in the Security sector). There is yet a widespread misconception on Standards (mostly around end users) and a lack of understanding of their paramount importance. To this regard, SMEs can hugely contribute to identify and close part of the missing Standards gap and drive this process forward.

Panel 3 – Role of SMEs, SDOs and PPPs for a more effective Standards adoption 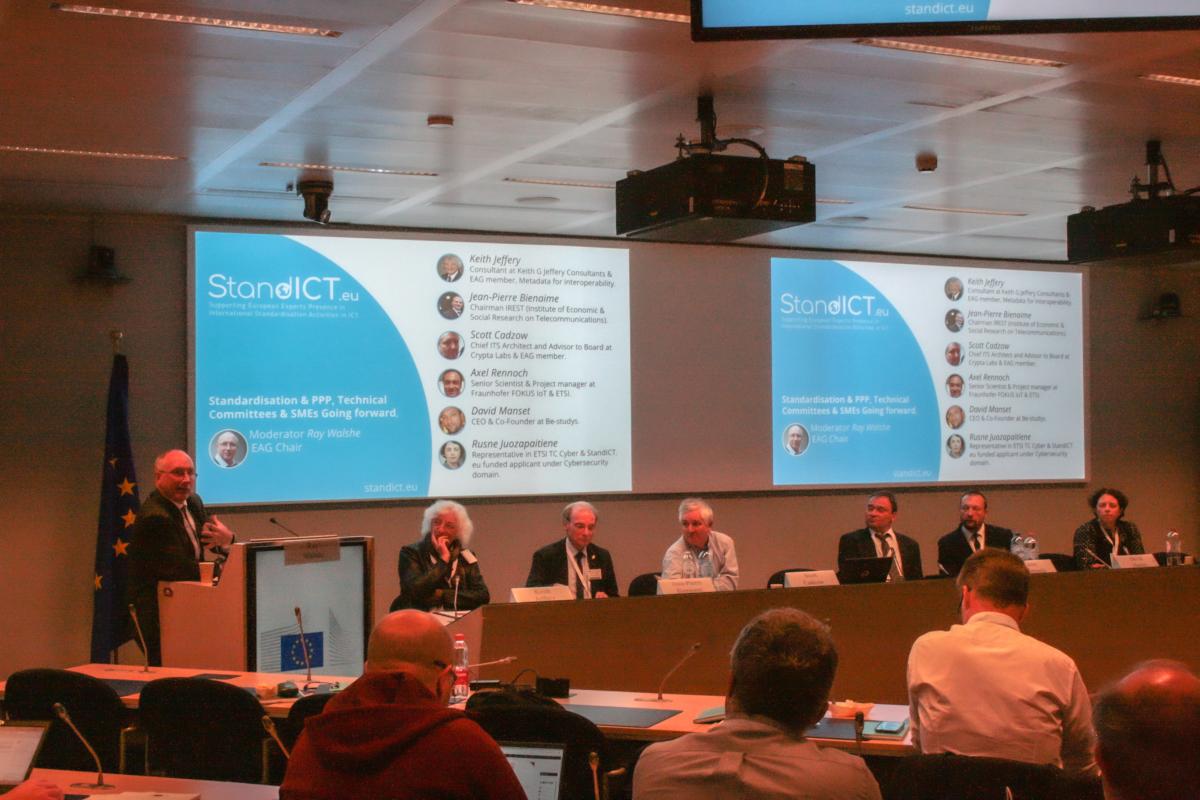 A common agreement has been found on the global dimension of ICT Standardisation. “European efforts can’t be detached from what is happening worldwide, specifically for key-topics as security, interoperability, usability and portability” stated Keith Jeffery. Again, an improved education for IT professionals could be the best solution to speed this process up. Different technologies may play tailored roles. While Jean-Pierre Bieniamé underlines that “5G will be the main driver for new products and services due to its capacity to capture consumers needs and requests”, Europe is already running a leading part in Cybersecurity domain despite there is still work to do since “too many international standards are still released without a proper adaptation to the European needs” according to Rusne Juoziapaitiene.

A final note on the relevance of Open Standards for a quicker market uptake, mostly endorsed by Start-Ups and SMEs that values a bottom-up member contribution.

The EC viewpoint: StandICT.eu at the forefront of ICT Standardisation

StandICT.eu Project Officer, Thomas Reibe (EC Senior Expert) and Emilio Davila Gonzalez (Head of Sector ICT Standardisation) joined the event also providing their insights on the future direction of these types of initiatives going forward. “StandICT.eu managed to effectively support all the different experts on global and international standardisation activities in a good atmosphere and with a community-driven approach. Moreover, the Standards Watch is a good starting point to build on to provide an easy-to-read overview of Standardisation. I would like to commend the StandICT.eu team also for the release of a valuable “Artificial Intelligence landscape analysis”, an overarching mapping to get a deep understanding of what is currently happening in this field on global basis”, the words of Mr Reibe. 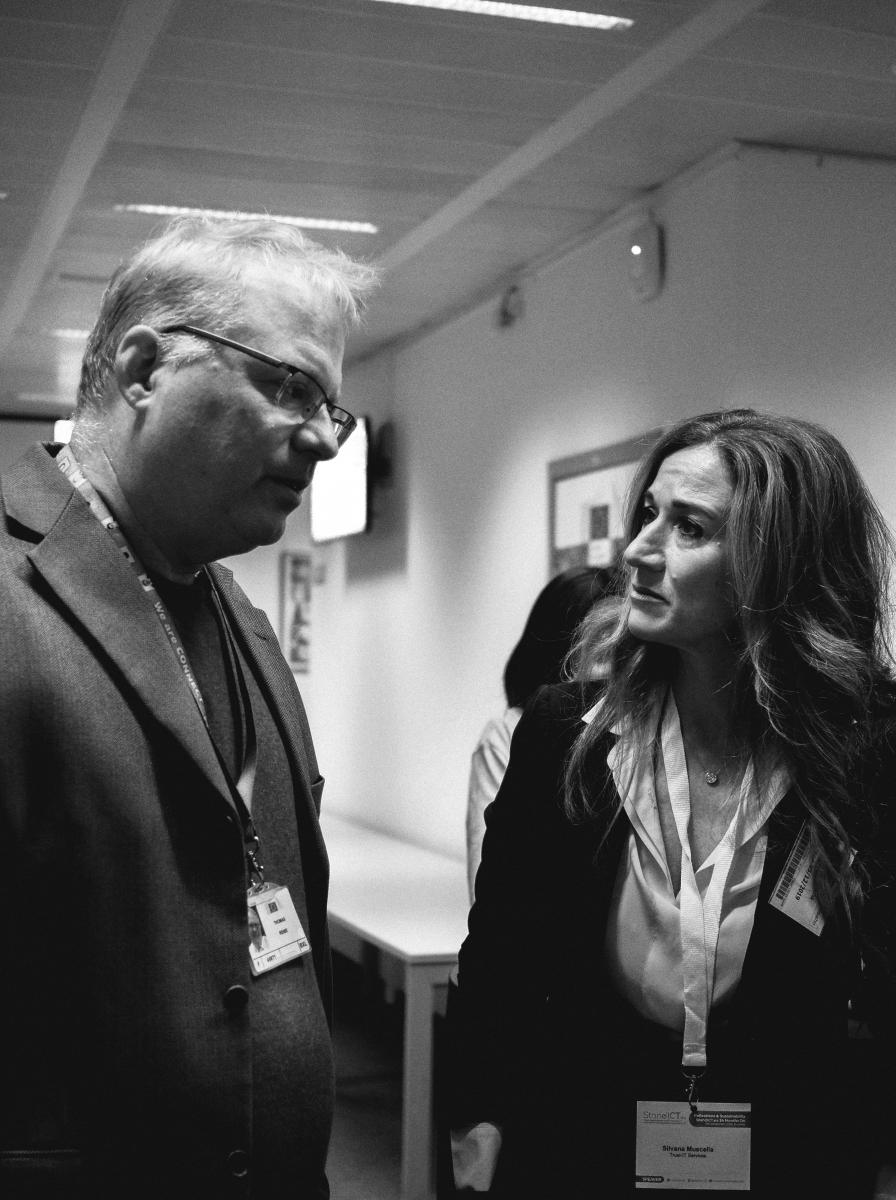 Workshop outcomes – Legacy of StandICT.eu and a window on the future of Standardisation

StandICT.eu officially released and delivered its Final Impact Report during the Workshop ( download here a digital copy). As emerged during the Workshop, there’s a pressing need of a broader and long-lasting approach to allow ICT experts to successfully carry out their activity and bring it to completion.

This Report is a comprehensive compendium of the 178 European applicants who brilliantly contributed to represent European excellence worldwide. A bright snapshot of each applicant’s work that clearly depicts the tangible impact delivered in several Digital domains and, on the other side, indicates future developments and research areas to be tackled in the foreseeable future. The Final Event was the perfect opportunity to acknowledge the quintessential position of Standards, why they should become (and remain a priority) and how efficient funding schemes may turn ICT specialist’s lives easier across different organisations and sectors.

The following are the main lessons learned highlighted in the Final Impact Report:

❖ Based on the trend in applications for funding by sector, it is possible to pinpoint areas that warrant future support.

❖ Based on current research, standardisation efforts related to the following technologies are expected to have the highest impact in the short to medium term, such as

❖ Recommendations for issuing future calls for funding based on these observations highlighting engagement at High Level Expert areas like the United Nations.

❖ Recommendations around Digital sovereignty as one of the priority topics in the future we may elaborate how Networks, Clouds and IoT to contribute to the ambitions, linking this to standardisation efforts.